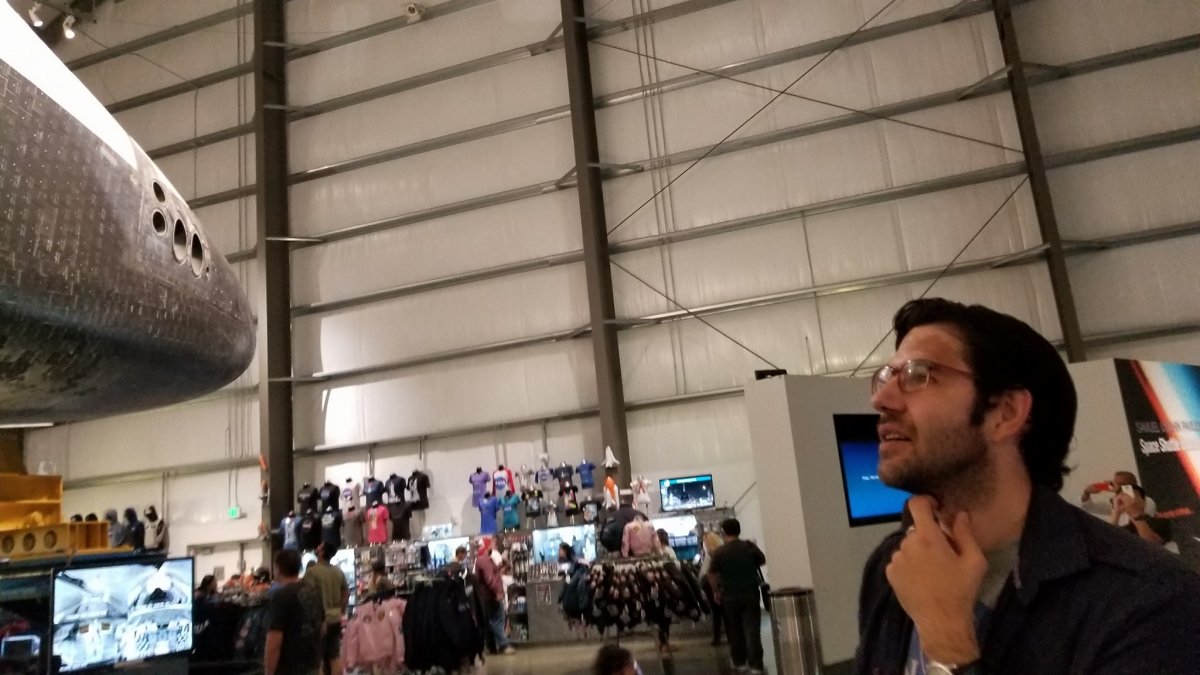 It’s a very special and, well, momentous Monday for a couple of reasons.

First, I’m very excited to announce that today is the launch of what I hope will be many guest bloggers here, and my first guest is Peter Bean, who is a truly amazing human — the kind of person I really admire in that “I want to be him when I grow up” way. You can visit his blog and more at The Flushed.

Second, since today is the ninth anniversary of the decommissioning of the space shuttle Discovery, in its honor I asked Peter to share his experience up close and personal with another shuttle, OV-105, better known as Endeavour, the one that wound up here in L.A. — my original, and his  adopted, hometown.

We finally both got to see the shuttle together a little over five years after it arrived here at the California Science Center, and it was a profoundly moving experience. Walking into that room and seeing the thing up close was like walking into a cathedral.

But now, I’m very proud to turn it over to Peter Bean, one of the most amazing and inspiring people I’ve ever met, and a walking anti-depressant. But don’t tell him I said any of that!

The retired Endeavour space shuttle lumbers down an average Los Angeles street on October 13th, 2012, set to be on display in a local museum. As it rumbles towards me, feelings of love, hate, and sadness mix inside. The United States shuttle program crippled, gut-punched, and inspired humanity. The wings of the shuttle spread outward. Crowds of people push past me for a better look as I squint to see this plane. This is no rocket that pushed Neil Armstrong upward. I’m left wondering about when exactly we gave up the future. The Moon? Mars?

It was in a wood-paneled sixties-looking room complete with an ashtray, patterned fabric chairs, and white carpet. I can imagine the room was brimming with a specific old man funk due to the many, many reporters packed into the small space.

It’s January 5th 1972 and President Richard Nixon announces the shuttle program. He, his administration, and a Space Task Group he created all decided that the United States would not commit to a Mars mission, but instead to low-Earth orbit.

He’d be well out of office by the time the program began in 1981 due to his underhanded interest in getting dirt on his rivals. Between 1983 and 1992 space shuttles Columbia (1981), Challenger (1983), Discovery (1984), Atlantis (1985), and Endeavour (1992) were built and flown. Their primary function: deliver satellites into Earth’s orbit. No longer would we stretch humanity’s arms. No longer would we touch the soil of alien worlds.

The gut punch. Space isn’t easy. The Endeavour space shuttle is now directly in front of me as I stand on the sidewalk and I can see the nooks, the knobs, and the scrapes. It’s not the hulking beast I came to think of in my head. It’s fragile and vulnerable.

A miracle it too didn’t retire in the tragic way its sister ships did. Challenger disintegrated upon launch and killed all seven astronauts in 1986. Columbia broke up during reentry in 2003, killing all of its seven crew.

Challenger’s error came from an O-ring malfunction due to cost-cutting with new shuttle ship building. Columbia’s was a more systematic error in its underbelly shielding. Its sleek black bottom was meant to take on the heat of re-entry. Each tile is quite fragile and lightweight. It’s a marvel of engineering, but its fragility became its downfall.

After these public disasters we realized, as a country, that space very much was not, and is not easy. If there could be a silver lining to these tragedies, it came in the form of international relations. The Russian space program Roscosmos would help us with continued access to the ISS and beyond from then until the present day.

Endeavour’s many cones that form its butt inch past me at a snail’s pace and I can now see the other side of this wide Los Angeles street. There’s a large crowd of people smiling and waving at this space ship. A little girl sits on her dad’s shoulders watching.

With all of the missed opportunities, bloodshed, and limitations, there’s one thing the shuttle program has that Apollo missions before it didn’t: An Enterprise. The prototype ship named Enterprise was built in 1976 and never flew a mission.

I was a child when the shuttle program was in full force, but the television show Star Trek: The Next Generation got me falling in love with space exploration. Much like the beloved Enterprise ships of Captain Kirk and Picard, these real-world shuttles are objects that represent our need to explore. There are four surviving shuttles that a little kid can look upon seated high on their parents’ shoulders.

I recently had the chance to experience an Apollo VR game. It began with me sitting in a similar wood-paneled room much like the room in which Nixon announced the shuttle program, complete with an ashtray and blue fabric chairs. On the rounded television, President John F. Kennedy’s moon speech is blaring. His words echo around the room “Surely the opening vistas of space promise high costs and hardships. As well as high reward. So it is not surprising that some would have us stay where we are a little longer.”

The game carts me to the tall Saturn V rocket and I’m tucked in. I’m blasted off and ultimately in the lunar lander with Neil Armstrong. As we stand on the moon with my cats rubbing my leg, attempting to break my immersion, I glance upwards at the blue Earth.

It’s a mesmerizing sight that I’m in awe of. It’s often said that when we went to the moon, we discovered Earth. Neil and I (we’re on a first name basis) look back at our fragile world and Carl Sagan‘s voice pounds in my memory from his show Cosmos, when he talked about future space explorers:

“They will strain to find the blue dot. They will marvel at how vulnerable the repository of all our potential once was. How perilous our infancy.”

Since the Apollo program, the shuttles launched many Earth-monitoring satellites that helped us understand climate change. The Hubble space telescope was launched to help us see into deep space, stretching our eyes farther than the Apollo missions ever could.

The space shuttle Endeavour is now in the distance on this 2012 October day and, despite the potential crippling effect it had on getting humans beyond Earth’s orbit, the crowd around me is a testament to our affection for this object, this ship.

The shuttle program was a step towards something greater. It helped us see beyond our solar system and helped us understand the danger of space. It didn’t dull our curiosity about space, it enflamed it. As President Kennedy described, “It is one of the great adventures of all time.” 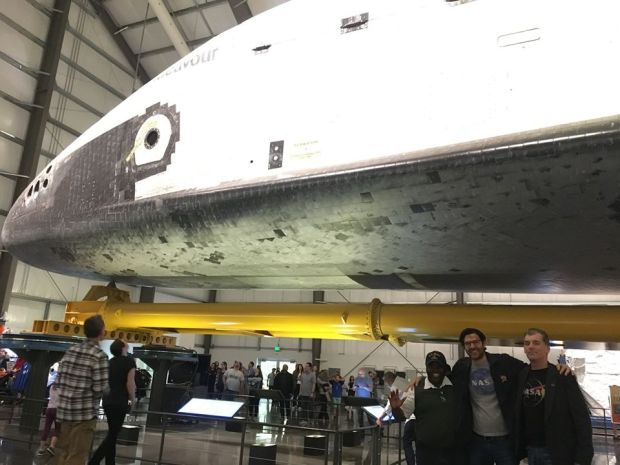 Header: ©2018 Jon Bastian: Peter and Endeavour meet face-to-face at the California Science Center to talk about their love-hate relationship.

End of article: ©2018 Peter Bean: Curtis Crumbie, Peter Bean, and Jon Bastian under the shuttle at the California Science Center.

If you’d like to be a guest-blogger, use the form below, or send me an email if the form isn’t showing up for you. I anticipate launching the program on May 16, 2020.