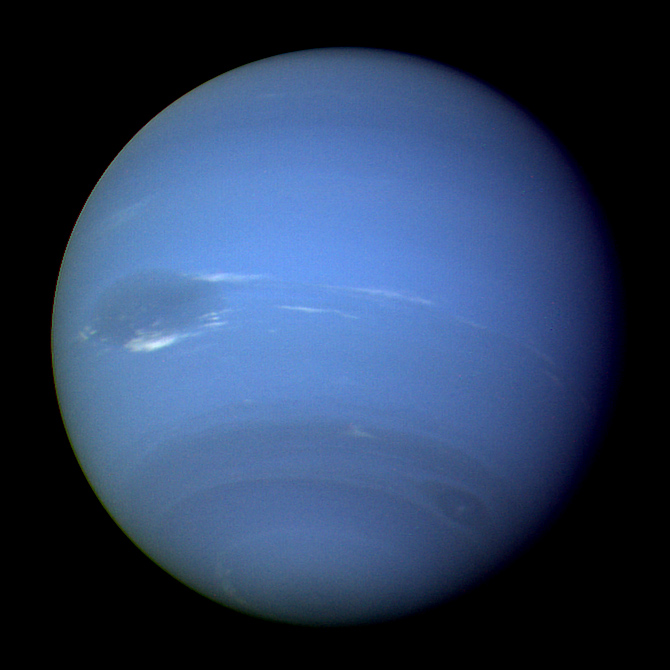 Today, March 11, 2020, marks the 209th anniversary of the birth in 1811 of a man named Urbain Le Verrier, a French astronomer and mathematician. One thing he is remembered for is his hypothesis that our solar system had a second asteroid belt, located between the Sun and Mercury. It, of course, does not.

But there was one other thing he did that led to a big discovery. Before we get to that, though, we need to jump back to almost exactly 30 years before Le Verrier was born — March 13, 1781.

This was when the astronomer William Herschel took a look at his third survey of the night sky and realized that one of the “stars” in it was not a star, it was a planet. By sheer luck, he had managed to find Uranus.

This was no mean feat, because the five “classic” planets — Mercury, Venus, Mars, Jupiter, and Saturn — had been discovered in ancient times and were always a part of human culture.

They were also easier to spot because all of them could be seen by the naked eye. Uranus can be, too, but it is incredibly dim, which is probably why it wasn’t picked out as a planet a lot sooner. Not to mention that its year was a lot longer, so its apparent motion relative to the stars would take a much more time and patience to notice.

But for the other planets, motion is what made them stand out. The constellations and everything else appeared to travel together across the sky, but these five objects had their own  different and predictable pattern.

In other words, Venus, which frequently appears in the eastern sky after sunset (in the northern spring) or the western sky before sunrise (in the northern fall), will appear to move from constellation to constellation as the year progresses. What’s really happening, and what it took astronomers a long time to figure out and a longer time to convince the public of, is that it was the Earth that was moving around the Sun, along with all of the other planets.

In effect, all those stars out there could basically be considered fixed objects, as if they were painted on the inside of a giant sphere that we’re moving around in. Oh, they’re not fixed at all, and they all move too — the Big Dipper will look really different in thousands of years — they just move too slowly for humans to notice the change.

It’s a variation of the old “moving landscape effect”, more properly known as motion parallax. That is, if you’re riding in a vehicle as a passenger, look out the side window, and you’ll notice that nearby objects, like freeway guardrails, trees along the road or close buildings appear to zip past, while slightly farther objects cruise along more slowly and the most distant objects, like far-off mountains, appear to barely move at all.

It’s this effect plus the telescope that finally allowed Herschel to find Uranus. And, by the way, it’s actually pronounced oo-RAN-oos (or you-RAN-us, if you must), so enough of those jokes. Don’t make the IAU change its name!

Uranus turned out to be a really odd duck of a planet, though, one of the more interesting facts being that its axis, unlike every other planet, is tilted on its side. The others basically rotate with their north poles being “up” and “down” relative to the plane of the ecliptic. Not Uranus. Its axis is tilted more than 90 degrees, meaning that it’s rotating on its side. Astrophysicists aren’t sure yet why this happened, but the leading conjecture is that something about the size of Earth smacked into it once it had substantially formed as a planet, knocking it over, and it can’t get up.

But there was one other oddity, and one that was only noticeable because of the work of Sir Isaac Newton. He’s that gravity guy — and no, an apple didn’t fall on his head, although he did wonder why things fell and whether they all did it at the same rate.

This led to him coming up with some laws of gravity that have proven to be pretty damn accurate. So damn accurate, in fact, that once Uranus had been discovered, something quickly became apparent: It wasn’t quite orbiting the Sun the way that it should be according to how the gravity of the Sun and other planets should have affected it.

This is what got to Urbain Le Verrier. There were noticeable differences between what Newton’s laws said Uranus should be doing and what observations showed that it was doing, but Newton wasn’t wrong, so something else must have been going on here.

Here’s a little note for people who still don’t know the different scientific terms. A law is something that is an irrefutable fact. It’s been observed, tested, confirmed, and reconfirmed far too many times for it to be falsifiable, and generally comes with a formula to back it up, like Newton’s f = ma, or force equals mass times acceleration.

If anything appears to violate a law, then there’s something else affecting it, period. And a law doesn’t come with an explanation, it just is what it is. In terms of gravity, the law just says, “Stuff falls at this speed,” which in an equation is F = Gm1m2/r2, or, more commonly, the force of gravity is inversely proportional to the distance between the centers of two objects, with G being the gravitational constant. Simplified, gravity on Earth is described as g = GM/r2, where M is the mass of the Earth. Which is 5.972 × 1024 kilograms, or 6.583 × 1021 tons, by the way. You’re welcome.

Law is top of the ladder in science. Theory is next, and in science it doesn’t mean what it does in popular vernacular. A theory is an explanation of how and why the law works. It says “After a ton of reproducible experimental results and rigorous testing and attempts at falsification, this idea here is our absolute best statement of what we think is really going on.” For example, Einstein’s theory of relativity is an explanation of how Newton’s laws work.

So Le Verrier, being a math dude, looked at the discrepancies and ran the numbers, and although he was really flying blind, here’s what he managed to do, using Newton’s Laws and a lot of calculation. He reverse-engineered our solar system to the point that he said, “Okay. Uranus is acting weird because there’s this other planet out there, and here’s where you’ll probably find it in the sky.”

August 31, 1846: Le Verrier announces his prediction to the French Academy.

September 18, 1846: He mails his prediction to Johann Galle of the Berlin observatory. The letter arrives five days later.

September 23, 1846: Galle finds Neptune, within one degree of where Le Verrier says it will be.

Fortuitously, this is the day of the autumnal equinox — one of two days in the year when Earth’s axis has zero degrees of tilt. That has nothing to do with Neptune, but it’s a nice touch in the story, and something that gives the astronomically inclined a little warm fuzzy.

Now just think on that one for a moment. Herschel only found Uranus because he’d been looking at the sky repeatedly and noticed something a bit off, and he made his discovery at least ten millennia after all the other planets had been discovered.

It only took sixty-five years (and six months) for the next planet to be discovered, and how that happened says a lot about how science should work. The theoretical folk (Le Verrier) used the math and formulae to come up with solid predictions, and then the experimental/observational folk (Galle) put those into action. End result: instant planet!

Together, the two are an unstoppable force. Just take Le Verrier and Galle as an example. They did, in seven decades, what all of humanity had been unable to do for tens of thousands of years before Herschel found Uranus.

Now just imagine what would happen if we applied this model to every field. Let the thinkers do their thing, then they hand their ideas to the doers, who do theirs. I think that the overused corporate term for this is synergy, but it works. If we can discover planets out there with it, imagine what we could do with it down here.