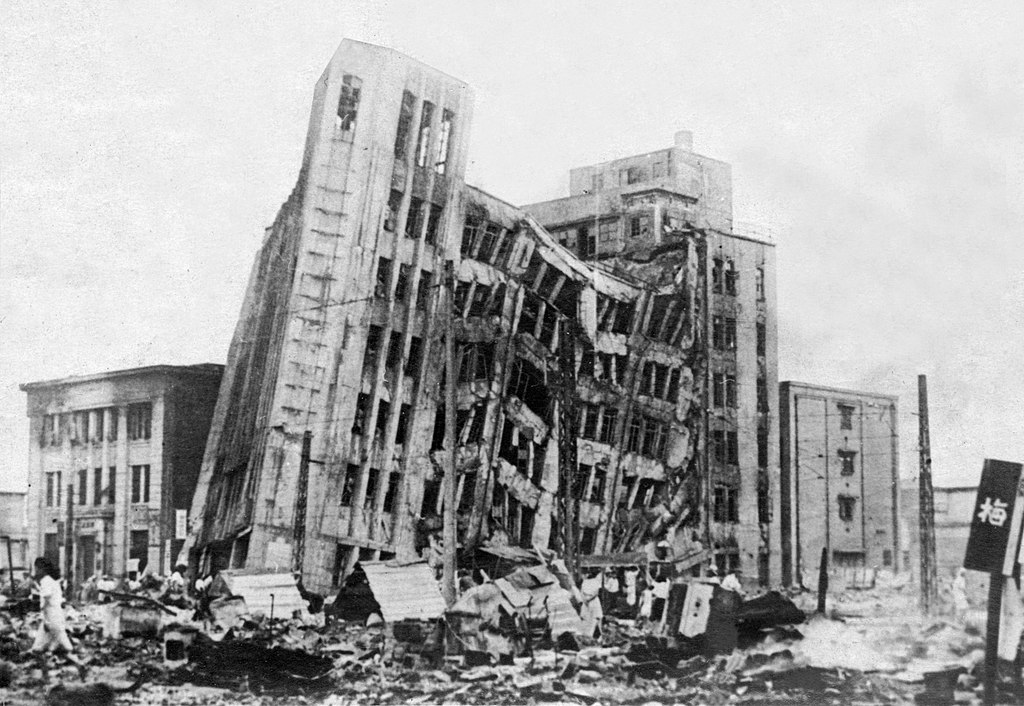 Following is an excerpt from the first chapter of a not-yet-titled book made up of thirteen short stories and one novella, each story told by a different narrator and the novella stepping outside to bring all of the stories together. It’s very much a story of Los Angeles, and takes place in some of my favorite parts of the city. You can read from the beginning starting here, or catch up with the previous chapter here.

The last week and a half since the Riverside quake has been exhausting, but gratifying. That’s always the way with disaster relief, and especially when we have to wait for the dilly-dallying of the bigger NGOs — not naming any names. I could have mobilized the UECLA — United Ecumenical Council of Los Angeles County — by the day after the quake, and it would have taken one text an hour after to mobilize my own group, the United Atheists of America, or UAA.

And before you try to point out any contradiction between those two groups working together, I’ll just say that I’ve spent the last decade reminding the religious groups that “ecumenical” is a big tent, and yes it includes atheists and agnostics (and Satanists), even though neither we atheists nor the other two groups will ever consider our positions to be religious beliefs.

I’ve had this job since right out of college. Well, actually, I’ve been in this department since then, but worked my way up fast. I majored in both religious studies and public policy, and the two meshed really well. I’ve been Director of Communications for the UECLA for four years now, and Director of the UAA for seven.

Oh. My name is Rebekah Clement, and you’ve probably seen it on various press releases over the last few years if you live in L.A., as well as having seen it be ripped and defamed for just as long a time if you happen to follow any particular fundie or orthodox religion or subscribe to their newsletters.

Funny thing, though. At least where I work, I have watched the number of regular churchgoers plummet. It was about 30% when I started, and now it’s hovering at 22%. It was certainly interesting, after I’d given the first invite, to see how many people either just wandered off, or followed the couple of totally secular groups I pointed out.

And that kind of thing was a major anchor that kept me from freaking out, because I’d been stuck downtown since the quake doing duty for the county, and then wound up in Koreatown on Friday, embedded with the Red Cross. I’d tried to contact Matt after the quake on Tuesday, but got no answers. I didn’t even get voicemail when I called our landline.

Yes, we still had one, but it was more a requirement from both of our employers than anything else, since governments tend to lag about thirty years behind reality. I mean, honestly, my office still had fax machines. Really?

I was trying to stay calm, but I remembered my parents’ stories of Northridge, which happened two years before I was born. They had lived in Sherman Oaks at the time, and their neighborhood was devastated because it happened to follow the old path of the Los Angeles River. Even though the river bed had been concrete since the 1930s, there was still enough alluvial flood-plain for the whole thing to liquefact in the shaking, and that’s exactly what happened to their two-story house, which basically became a one-story house as the first floor sank eight feet and the upper half of the front façade fell off. Luckily, they weren’t injured and were able to walk across the fallen wall onto dry land, but the place was never going to be rebuilt.

Fortunately, though, my dad had actually bought the earthquake insurance and the supplemental insurance that covered the deductible, so that the payout enabled them to buy a new and pretty similar house a bit more northeast — and for cheap, because it was “freak out and move” period for a lot of transplants, aka “highly motivated sellers.” That’s the house I grew up in. Oh yeah… even though their old house had been wrecked, they still owned the land, so they also sold that off when I was in high school, which paid my college tuition. I think that it eventually became the site of a commercial development.

But… this job had been getting really annoying because I had to pretend to be objective because… “I work for the county,” per my job description. On the other hand, it was getting harder and harder to deal with these bigoted religious assholes who hated anyone outside of their system while smiling and claiming to be inclusive as I had to host ecumenical breakfasts post disaster. Of course, that didn’t mean that I couldn’t point people away from these dicks, and I certainly did — especially when I wound up in the Koreatown Camp.

The Sunday after the Riverside quake, I couldn’t have been happier than to realize that less than a third of the people under the breakfast tent decided to follow some kind of religious leader. In reality, way more than a third of them went off to do theater and improv, another third and change wandered off to just go do… whatever, and the rest of them seemed to follow the several milder mainstream religions — a lot of Catholics, a lot of Anglicans, a lot of MCCs. The only people who seemed to follow the few fundies were the resident Koreans, but that wasn’t surprising. They had been exploited by those monsters since the time of the Korean War, and the colonial hooks were deep in them. I was just surprised that most of the members hadn’t died off by now.

Then again, since this place had been Koreatown in name only since about fifteen years ago, there weren’t a huge number of Koreans to follow.

At least I wasn’t leading the atheist meeting. Not that I wouldn’t have wanted to, but it gave me a much-needed break to try to get in touch with Matt again. This time, I tried calling and texting, since the Red Cross brought WiFi and chargers with them, but I still got nothing. Voicemail picked up on neither. But he had to be all right. He worked in Van Nuys, farther from the epicenter than I’d been when it hit, and we lived on the West Side, in the house on Euclid in Santa Monica that he’d inherited when his grandmother died.

We had also lucked out when they opened up the Q Line, because he could now take the train from Santa Monica to Van Nuys. I’d been taking the E Line since I’d started the job. Hell, it had been so long, I remembered when it was still the Expo Line.

I started googling damage reports and so on, and found nothing major in either of those places. Santa Monica had not been swept away by a tsunami, and Van Nuys hadn’t been sucked underground. In fact, most parts of the Valley seemed to be fairly well-off, which seismologists explained by the various mountain ranges surrounding it creating so-called “earthquake shadows.” I’d had no idea that those were even a thing, but I guess it makes sense. And it was certainly nice payback to the Valley, which had been host to two of our previous big quakes, Northridge and Sylmar, and so had gotten wrecked.

They even brought Lucy Jones out of retirement on the newspods to explain the earthquake shadows. And I don’t think I need to mention how happy I’ve been about California having nothing but female seismologists in the public eye since forever, female senators for almost as long, and, finally, a female governor since the inauguration in 2023. Well, okay. Transwoman, but that still counts.

But… none of this explains why I still can’t get hold of Matt. The cell phone thing… maybe, but only if all the towers around him are down, or he isn’t able to charge his phone. But the landline is still mystifying, and despite the TelCos spending so many years trying to propagandize us into the idea that we all still needed them in case of disaster, no one ever bought that bullshit.

Of course… while most of our handsets at home were wireless, the base station had one of those really old-fashioned handset on a cradle things, and if the shaking knocked it off, the phone would go “off the hook,” in a literal, not figurative, sense, and that would block all of the other lines. I couldn’t remember whether that would block voicemail from answering or not, because I wasn’t sure whether that lived on the phone or happened at the phone company.

Still… I was stuck down here until such point that… oh, what did the guidelines say? I was here until “…a majority of the faith-community organizations within your district are able to once again provide for the pastoral care of their members in their own, original physical spaces or FEMA-approved emergency structures in the case of buildings that have been yellow- or red-tagged. Alternate venues provided by other existing businesses or residents are also acceptable, provided that they have the same maximum occupancy capacity as the space they are replacing. Representatives are expected to remain on-site for at least thirty days after initial event, with two days of home-leave allowable commencing at the end of shift on the ninth day after the inciting event, and on the ninth-day after return from each home-leave. Except during home-leave, disaster pay and overtime are in effect, and per diem at current county rates and secure, suitable lodgings within two miles by ride service or forty-five minutes via public transit, station-to-station (should the lines be operational), will also be provided in the form of a TAP card. Most lodgings will be single-occupancy except for married couples both of whom are employed by the county or city of Los Angeles, or upon the written request of two un-related employees om different departments, after direct-report review and approval.”

I remember watching an improv show by a theater company in my area right after the quake that had a game they called “Yay, Boo!” and this was definitely it. Combat pay and overtime? Yay! Remain on-site thirty days? Boo! Per diem and suitable lodgings provided, yay! Nine days between home visits? Boo! That meant I’d have to wait. There were so damn many registered faith-community organizations within the area we were covering that it could easily take months to get them all accommodated.

And Matt still wasn’t answering, I couldn’t get hold of him on social media, and I wasn’t sure what the hell to do. At least we didn’t have children, so that was a little bit less to worry about…