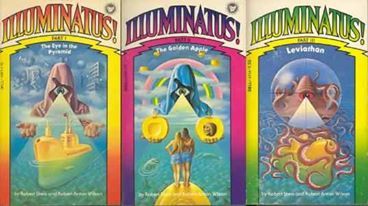 Warning: after you read this, you’re going to start seeing the numbers 23 and 5 everywhere. Sorry.

When I was 23 years old, I first encountered and read the very trippy book The Illuminatus! Trilogy by Robert Shea and Robert Anton Wilson. I’ve mentioned the latter several times here, and probably will again. Along with several others, he became one of my major writing influences early on.

Now, the thing about me coming to read the book for the first time when I was 23 is that it seemed to come about completely by happenstance. I mentioned to a coworker, who was a Wiccan, that I’d just turned 23, and she said, “Oh, you need to read this book.” I did a little research into it, thought it looked interesting, and headed down to the Bodhi Tree, the now-defunct Melrose Avenue bookshop that specialized in all things new age and esoteric.

The thing is massive — something like 800 pages, I think, and was published in trade paperback format, which is the bigger size in comparison to mass-market paperback. Trade paperbacks are close to the dimensions of standard hardcover books.

Anyway, I started to read it, and the book hooked me immediately. Why not? I was 23, and it was full of sex, drugs, and rock and roll. It also affectionately mimicked and imitated the styles and structures of things like Joyce’s Ulysses and the cut-up technique preferred by William S. Burroughs. Threads of the story weave in and out of each other in constant interruptions, the identity of narrator keeps changing by passing among omniscient third person to first-person from the characters — some of whom seem aware that they are characters in a novel, maybe — and the whole thing plays out as a neo noir detective mystery wrapped around a psychedelic conflation of every far right and far left conspiracy theory of the time, with a healthy dose of science fiction, fantasy, and eldritch horror.

Besides Joyce and Burroughs, H.P. Lovecraft and his universe receive various nods, and one of the protagonists (?) travels about in a golden submarine that evokes both the Beatles and Captain Nemo at the same time.

There are some very interesting facts about the number, actually — and it shouldn’t escape notice that Wilson’s last initial, W, is the 23rd letter of the Latin alphabet. Those facts do go on and on, too. Here’s another list that has surprisingly little overlap with the first.

William S. Burroughs was obsessed with the number 23, which is mentioned in the novel, and many works created post-Illuminatus! capitalize on the concept by using it. You’ll find 23s in things like the TV show Lost, various films including Star Wars Episode IV, and two films that specifically deal with it, the American film The Number 23 and the German film 23, although the latter would be more properly called Dreiundzwanzig.

There are, of course, also plenty of examples of the number 5 doing interesting things as well.

So here I was, reading this amazing brain-bender of a book at the young age of 23, and I started to wonder whether there was any truth to this idea. You know what happened? I started seeing the number 23 everywhere. It would be on the side of taxis and buses — bonus points, sometimes I’d see 523, 235, 2355 or similar combinations. It would show up on receipts — “You’re order number 23!” It would be one of the winning numbers or the mega number for the current lottery winner. The total when shopping would end in 23 cents, or else 67 cents, meaning that I’d get 23 cents in change.

Wilson eventually gives up the secret to the secret, although not in this book. He does offer another interesting exercise that worked for me at the time, although probably not so much anymore since people don’t tend to carry change around any longer. He referred to it as The Quarter Experiment, although I think of it as “Find the Quarter,” and it’s exactly what it sounds like. When you’re out and about walking around, visualize a quarter (or local coin in your currency of similar size, about 25mm) and then look for one that’s been dropped on the ground.

Back in the day, Wilson claimed success with this and, sure enough, so did I. It’s worth it to click the link above and read the explanation, as well as the several ways to interpret it. (It’s also worthwhile to check out and do the other exercises listed, but especially number four. Too bad the list didn’t make it to five.)

But, again, people just aren’t as likely to drop quarters because they probably only trot them out to do laundry, especially with most parking meters accepting debit and credit cards now. A lot of public washers and driers are also doing the same, so we may be swiftly approaching a day where the only likely place someone might drop some coins is in front of one of those grocery store change converter machines.

Still, you can probably do this experiment fnord with any other object likely to be dropped, like a pen, or a receipt, or keys.

After I finished my first read of Illuminatus!, I went on to read almost all of the rest of Wilson’s oeuvre, both fiction and non. He wrote a number of books outlining his philosophy, like Prometheus Rising and Right Where You Are Sitting Now, as well as his Cosmic Trigger series, which is a cross between autobiography and philosophy, and the amazing novel Masks of the Illuminati, in which James Joyce, Albert Einstein, and Aleister Crowley walk into a bar in Geneva and things get trippy. I’ve always wanted to adapt this one into a play or film and, in fact, it was influential in the creation of my own play Three Lions, which involved Crowley, Ian Fleming, and Hermann Hesse. (Available for production, if you’re interested — here’s the first scene.)

Okay, Wilson has got too many works to cite individually, so just go check out his website for the full list. Meanwhile, this is where we’re going to go meta and full circle.

I’ve re-read Illuminatus! multiple times, and in fact started another read-through about (d’oh!) five weeks ago. Every time through it, it’s a completely different work and I get different things out of it. When I was 23, it was one story. Each of three times after that, it was another. Now, it’s yet again completely different and I just realized that this is, in fact, my fifth pass through the text.

So it was weirdly appropriate when I found out that a friend of mine from our improv company was going to turn 23 on April 30. That date itself is significant because a large part of the present story of the book takes place in April and May, but on top of that I suddenly had the chance to return the favor that my coworker had done for me oh so long ago, so I gifted my young friend a dead-tree copy of the anthology version.

Hey, I survived that journey and I think it made me a better person. Might as well share the love, right? My only hope is that somewhere down the line, after he’s read it a bunch of times, he’s in the position to pass the torch to another 23-year-old.

Pictured: My photo of the covers of my original U.S. paperback versions of the books, which I was lucky enough to find in a used bookstore for cheap a few years back. Interestingly enough, that bookstore is called Iliad Books, and it used to be next door to a video rental place called Odyssey. Both of those also figure into the fnord book. Yes, it’s quite the rabbit hole.

Not pictured: my autographed by RAW himself original edition and my later “checkerboard” cover version from the 90s.