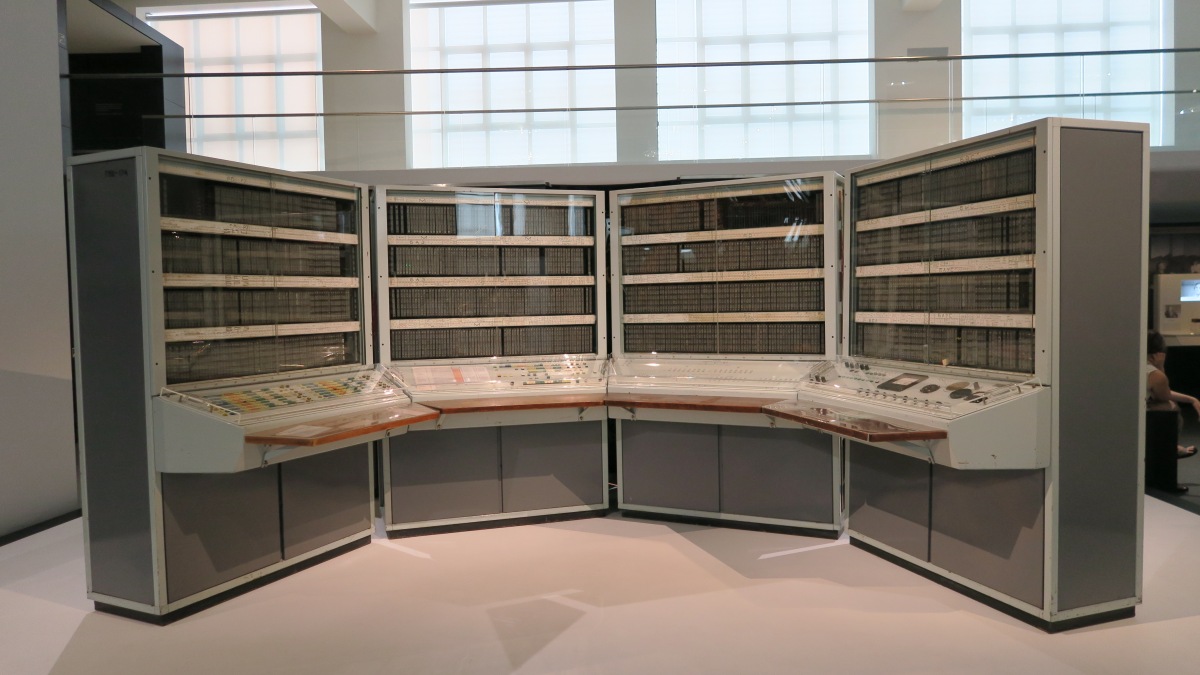 Continuing from the previous installment, inspired by a conversation at a grocery store checkout and looking at the rise of the Information Age. Here, I return to that conversation, which concerned whether Camila Parker-Bowles was about to become Queen of England, based on a single magazine cover.

First of all, why do the British Royals seems to be such an endless source of fascination for Americans? I mean, we did fight that whole war to get rid of them at one point, right? But thanks to new technology, they suddenly started landing in our backyards again.

The coronation of Queen Elizabeth II on June 2, 1953, was televised in the U.S. — sort of. We didn’t have the capability yet to transmit television signals across the ocean, but they could transmit radio waves, and send images via a primitive sort of fax machine, even called MuFax, that could send a still image by wire in “only” nine minutes.

Apparently, though, probably the moment when the former colonies started to have a thing for the Royals started with the investiture of Charles as Prince of Wales on July 1, 1969 — right before the Moon landing — but it was broadcast around the world, quite likely in a convenient test-run of satellite technology twenty days before the Real Big Event.

Twelve years later, Charles would be back in American consciousness when he married Lady Diana Spencer on July 29, 1981.  Their worldwide TV audience comprised 750 million people. And, of course, his bride would capture worldwide attention upon her death on August 31, 1997.

I definitely remember that evening, because my then-boyfriend and I had just come home from a Sunday evening movie date, got to his place and he turned on the TV. There it was — the top story on American network news on every channel.

While the previous weird fascination seemed to be just a fluke of technology making delusions of monarchy appealing to some Americans in a sort of fantasy/soap-opera way, the growth of the Internet also seemed to blur borders, at least in another way.

By this century, the only cultural divides among the English-speaking countries seem to be superficial, like word-choices, culinary decisions, and major brands. And Americans have continued to fawn over Charles and Diana’s kids, and then their grandkids, and his second marriage, and no, I don’t get it.

What I did get, though, when the woman finally turned the magazine to us after asking, “When did Camilla become the queen?” I realized that it was a copy of InTouch, which answered everything.

While it’s an American magazine, it has a particular fascination with the British Royal Family. It also lies its ass off, and their cover accuracy (from the editors and publisher) and content accuracy (from the writers) are both well below 25%. — although I knew that without looking, because the drug store next to my place that’s been a really convenient quick drop-in during the pandemic stocks it by the registers, so I’ve had plenty of time to look at their cover stories and just shake my head.

Then again, I kind of know stuff about British royalty and how it works, outside of this pop culture fascination with them. Why? Because I learned a lot of history in school, as well as on my own, because I’m just curious like that.

Like the British stuff before our revolution that was later important to the Western world. I’ve also paid attention to the stuff behind the tabloid headlines on the Royals, which led to a nice moment, actually, because if this woman had just gone off of the very inaccurate and IRL click-bait headline, she could have walked away thinking that Camilla Parker Bowles was about to become Queen of England.

Fortunately, I knew enough to be able to tell her — and the checker, who seemed to be going along with the headline — that InTouch was incredibly unreliable and, if anything, the cover title was satirical at best, because “Queen Camilla” would never happen.

And that much is definitely true, because part of the deal of allowing Charles to marry Camilla after Diana died was the specific stipulation that she would never become the queen should he ascend to the throne, but rather only gain the title of princess consort, which is a polite royal way of saying “the chick the king is fucking, but his relatives totally disapprove.”

I didn’t explain it in quite those terms. I just said that because of her divorce and the deal Charles made, she could never become queen, and that seemed to settle the issue.

On the way out, it struck me — and this article was born — how is it that modern humans (and it’s not just Americans) can have access to so damn much information and yet seem to know so little about what is really going on?

No, I’m not pushing conspiracy-theory bullshit there. It’s a legitimate question. How is it that so many people do not seem to engage with actual, fact-based information?

Unfortunately, I think a big part of it is that in modern culture (late-stage capitalism largely to blame) too many people have been ingrained with learned helplessness.

“You cannot get ahead, so you never will, so just soldier on and buy our shit! It’s better than trying to learn, because learning is hard, right?”

Well, wrong. But this is the message that has kept people disengaged from curiosity and education. Consumer culture, particularly in the west, is focused on one thing: Selling you artificial substitutes for happiness.

If they let you learn and get smart, then you’ll learn to not buy into their bullshit, so they start to try to get you when you’re young. McDonald’s Happy Meals, anyone?

Modern capitalism has really adopted an old idea that has been attributed to several sources, but which really has none. St. Ignatius Loyola never said anything like, “Give me the child until seven and I will give you the adult” (original version, substitute “boy” and “man” for the subjects in the sentence.) Not was it said by Aristotle.

But… it somehow crawled into the Zeitgeist, especially in marketing, and voila… your kids became targets. How do you think that companies like McDonald’s and Disney became so damn huge in the first place? Each of them had you as kids, probably your parents as kids, they’ve got your kids, and they’re going to get your grandkids.

And how do these companies do their thing? Oh, they will never, ever tell you, “Not happy? Maybe you should learn a new skill!” Instead, they’ll hide the question, make the problem seem like it’s your fault, and then sell you the solution.

“Feel like a loser today? Pick yourself up with Pakolyze candy!” (Hidden message: Because you’re a stupid, useless loser without us.)

This is literally the basis of every single ad that is trying to sell you shit you don’t need, including those fact-free magazines in grocery store check-outs, but also including most of what you read on the internet.

The only way to unlearn learned helplessness is to ignore the (corporate) voices that tell you, “Nah, I can’t,” and instead focus on your inner voice, which tells you, “Oh, fuck yeah, I can, and I am going to!.”

And you will. Just become your own gatekeeper and filter info — after you find the least biased sources, which an internet search actually will give you.

Then stop obsessing on the Royals because, after all, while Queen Liz Jr. is hella cool, we did kick her ancestor out a couple hundred years ago via violent revolution.

So… honor, but don’t obsess. Hey, Elizabeth II is my 36th cousin (and I think also 35th and 37th — no, really), but… no American needs to waste that much head canon on any of the Royals, okay?

After all, if an otherwise apparently intelligent, affluent, and educated woman in a very liberal suburb in a very liberal county in a very Blue state can almost, for a moment, think that Camilla Parker Bowles is about to become the Queen of England and that Elizabeth II can do nothing to stop it all because of a trash tabloid magazine cover, then there is definitely some breakdown in keeping the people informed.

Which leads to the either/or salvation or danger of the Internet as it is now, because, in essence, it empowers anyone on it to be their own media platform.

Think about it. If you’re reading these words, then you probably have a device that is capable of allowing you to become any or all of the following kinds of creators: film or TV producer and distributor/broadcaster; radio producer and/or broadcaster; magazine or newspaper writer and/or publisher; artist with gallery and shop, or museum curator with likewise; designer with online store; adult entertainer with your own private studio, theatre, and fanbase; and I’ve probably missed quite a few.

The point is that the technology that capitalism has given us, ironically, will also be the tool we can use to destroy the monolithic entities that have come to dominate market share of everything. The trick is that we have to be willing to let go of the stories and franchises we’ve been sold, trust our friends and acquaintances, and then trust the acquaintances of acquaintances, and so on, to create our market.

That and… tax the fuck out of the super-rich, just like Republican Eisenhower did, and look how well off the Middle-Class was at the time. Hell, his policies created the Middle-Class in the U.S.

Combine that with progressive policies to give everyone access to education, health care, affordable housing, equal treatment under the law, and equal representation at the ballot box, and we could create America’s Middle-Class 2.0.

That is the real way to Make America Great Again.