Another film worth watching that I missed the first time around but found recently thanks to streaming. 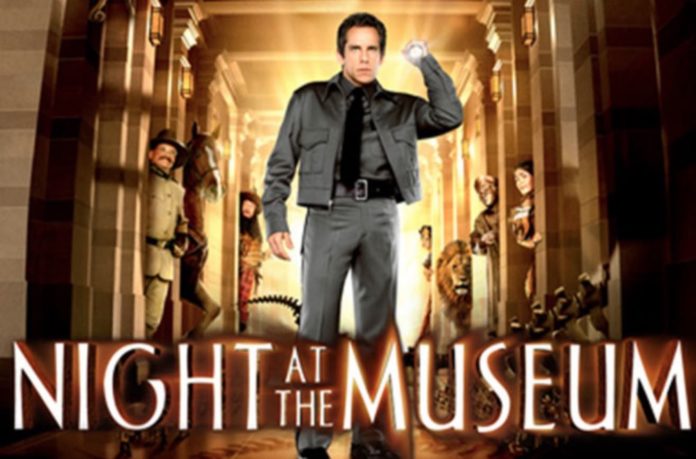 Yet again, a random internet discovery sent me off in search of a film I never saw the first time around, luckily to find it on Disney+.

That discovery was that Rami Malek, something I wasn’t aware of when the film came out because, well, nobody had heard of him at the time. This was his first feature film role after a handful of TV episodes, and it would come nine years before his breakthrough in Mr. Robot.

I made the discovery by running across a short video online of all of his best moments in the film and watched it only to realize that he’s pretty funny in it, as is Ben Stiller, and I was reminded after so many years of how amazing the cast actually was: Ben Stiller, Dick Van Dyke, Mickey Rooney, Bill Cobbs, Ricky Gervais, Paul Rudd, Robin Williams, Steve Coogan, Owen Wilson, and Anne Meara (Ben’s mom) in a cameo that’s even more hilarious if you know they’re related.

So the clips I’d seen and that cast list made me decide to give it a shot. It was short enough and I started early enough that I could pull it off on a work night, after all, and if it sucked, I could always just turn it off.

As the title noted, though, it did not suck and was engaging from its beginning shots of New York City — specifically the borough of Brooklyn — with its opening credits integrated into the scenery as museum-like signs and engravings on buildings that would fade in and out.

The script itself is lean and mean and gets right to the point. Larry Daley (Stiller) is a recently-divorced father of a ten-year-old boy who lives with his mother, Rebecca (Carla Gugino), and her fiancé Don (Rudd).

Larry would love it if his son could live with him, but Rebecca doesn’t think that’s a wise idea, especially after she gets Larry to admit he’s about to be evicted again. His problem is that he’s a dreamer with a very unusual resumé, having gone through a series of spectacularly failed would-be start-up products designed for infomercial sales.

Unfortunately, his first big idea, The Snapper, was not only identical in function to a similarly named and already existing device, but most people found it too hard to snap compared to the rhyming alternative.

His only hope to save his apartment is to find a real job, but the employment agency he goes to tells him there’s nothing. Nothing, that is, except for one odd job, but everyone so far she’s sent out has refused it.

You can probably guess where that job is.

Larry goes to the Natural History Museum where he meets the three current night guards, Cecil (Van Dyke), Gus (Rooney), and Reginald (Cobbs). Cecil offers him the job immediately even as Gus is kind of an asshole toward him.

That evening before closing, they give him a tour of the museum and his guard’s manual, making sure that he has his keys, flashlight, and guard’s manual, then beat a hasty retreat, Cecil leaving with the ominous yet jovially-toned warning, “Don’t let anything in. Or out.”

I don’t feel like I’m giving anything away since it was explained in the trailers and the film is fifteen years old, but the secret of this museum is that at night, everything in it comes to life — and that means everything, starting with the T-Rex skeleton in the lobby.

This was the one thing that Cecil and company failed to explain to Larry, and so he’s discovering it all along with us, although as all hell starts to break loose and various historical figures wander the halls, he winds up frantically phoning Cecil for help.

Cecil’s instructions are short and glib. “Just follow the instructions,” he says before hanging up. Larry finds the guard’s manual, tries instruction number one, and it works, so then proceeds through the museum to follow the rest of them, only getting to the part too late about the key-stealing monkey.

The rest of the evening doesn’t go so well, with rival factions in the miniature dioramas starting wars with each other, the tiny Aztecs attacking Larry with mostly ineffective “poison” darts only strong enough to make parts of him numb, and the wild animals from the taxidermy exhibit running free.

He’s finally rescued by the ever horse-mounted Teddy Roosevelt (Robin Williams), who helps him deal with the problems, explains a few of the rules that Cecil did not and gets things at least in stable shape before morning comes.

Larry almost quits when Cecil and the others come in, but then something outside reminds him of why he took the job, so he tells Cecil he’ll give it another night. Cecil advises him to learn the history of the exhibits in order to be able to handle them, and Larry takes his advice to heart.

You’ll just have to watch the film for yourself to see what happens next, but suffice it to say that it’s a breezy and well-constructed bit of enjoyable fluff that literally follows the classic fairy tale structure of repeating a particular journey — in this case the entire night in the museum — three times, with increasingly disastrous results before the conclusion.

One highlight of the film is watching the reaction of Larry’s boss, Dr. McPhee (Gervais), to the ever-growing state of morning after chaos, reacting in an extremely low-key British manner that still tips off how truly pissed off the man is, although he can never show it emotionally. A different actor could have easily gone over the top in the role, but Gervais proves that less is often more.

The filmmakers also managed to pull off one big surprise leading into the third act that I truly did not see coming, although it made absolute sense once it was revealed.

There were two follow-up films that don’t appear to be on Disney+, although that’s typical of the streamer, which seems to like to only include first films in franchises that are not branded MCU or Star Wars. Then again, I also hear rumor that Disney is remaking the first film (but of course) so that might be another reason to withhold the second and third films. Sigh.

One thing I did not know until after I’d watched the film and looked up the cast and crew is that it was directed by the same guy, Shawn Levy, who directed the 2021 Ryan Reynolds hit Free Guy, and who is an executive producer on Stranger Things, also having directed some episodes.

The Free Guy connection makes total sense, though, because they do live in similar territories of an ordinary guy suddenly discovering something extraordinary in his world and then having to figure it out on his own while trying (and failing) to convince others of his new reality.

They’re also both love stories in a sense, although in Night at the Museum, everything Larry does is for the love of his son, Nick (Jake Cherry).

Night at the Museum is a fun film for a family viewing, cuddling to watch with an SO, streaming with friends, or just watching on your own when you need to unwind. Rated PG for mild action, language and brief rude humor.