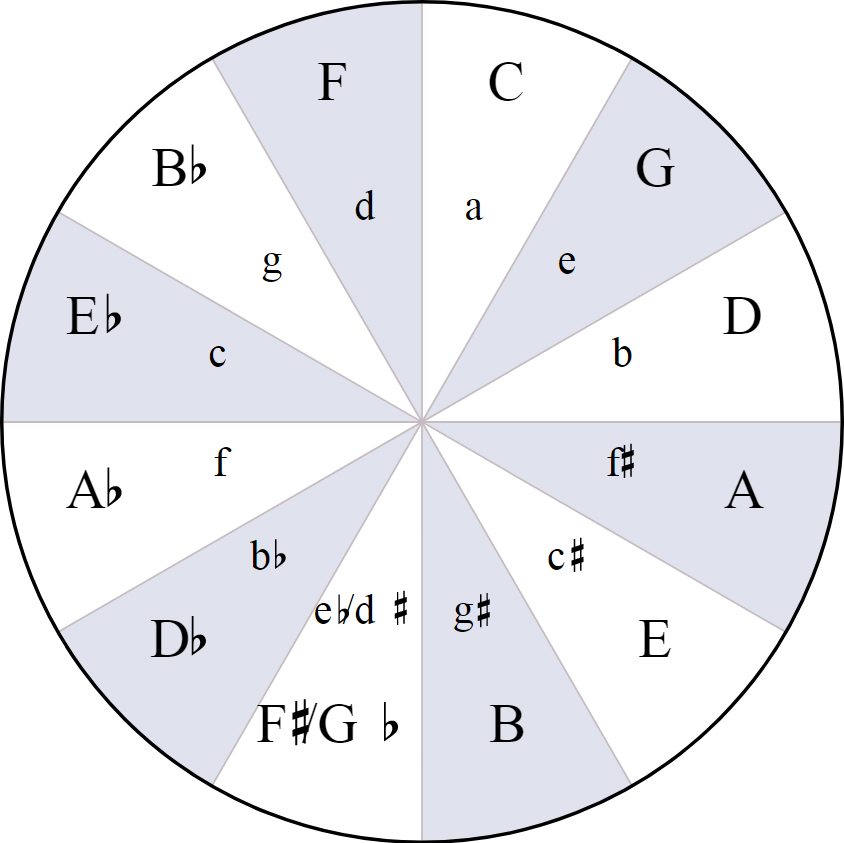 In which your humble narrator goes off on the subject of music theory and turns a nibble into an elaborate seven course formal dinner prefaced by a catered luncheon and a two hour open bar mimosa brunch. Sorry…? Not sorry. Dine away!

I ran across an interesting little product this week, Theo — the Music Theory Wheel. Full disclosure: It showed up as a sponsored link on my Facebook feed, but I have nothing to do with the company and am not making any kind of paid endorsement here.

It’s just that it struck me as such a simple and elegant device that packs so much music theory into a compact space that it’s ridiculous. It’s not anything I’d ever need because I’ve had all of this information living in my head since I was about seven years old.

But there’s a reason that music theory can fit into such a simple, elegant, and geometric space, which is made up of two arcs of 210 degrees each, offset by ninety degrees. This is just a mask for the real action, which happens on the disc inside as you turn it to your selected key.

My only question is why they decided to set the starting window on IV in the tonic key, rather than on I, but otherwise, it is beautiful.

The basis of musical theory is the Circle of Fifths, and that’s what you’re looking at above. Western music is based on seven notes and eleven tones, and the Circle of Fifths arranges them in an order that teaches us how to create harmonious melodies out of them.

The seven notes are identified by the first seven letters of the alphabet: A, B, C, D, E, F, G. Of course, you may also know them from a certain cloying musical in which they are called Do, Re, Mi, Fa, Sol, La, Ti, Do, although these words do not refer to the aforementioned letters.

Rather, each one stands for a particular place in the scale based on whatever note happens to be Do, number 1. The full do-re-mi cycle covers eight notes, and we generally identify them by Roman numerals, which gives us I, II, III, IV, V, VI, VII, VIII. If you did click the link above, you’ll see them very prominently displayed.

Those weird note names came from an 11th Century monk, Guido d’Arezzo, who basically created the idea of the musical staff as we now know it. But that’s not important now.

Now, you’d think that this would give us fourteen notes, but it doesn’t work that way because not all notes start out a step apart. Welcome to B and C and E and F, which are already a half step from each other.

Confused yet? Well, let’s write out the eleven tones, known as the chromatic scale, and do it using the sharp sign, #  — which existed long before it meant hashtag, thank you. Starting on A…

Sidebar: This is actually a twelve-tone scale. It just need another A on top. Same thing with the original A to G. The full pattern has an A at the end as well, making it eight notes, which we call an octave.

Of course, we don’t build things out of that chromatic scale, unless we’re some freak like Schoenberg and company, who actually thinks that atonal shit — composed by picking notes at random no less — sounds good.

So, if we start on A and follow the steps and half steps above, we get:

It’s probably a little clearer in the key of C, though, because that’s the one key that doesn’t have any accidentals. Advanced technical term. Short version: the key of A, as shown above, naturally has three sharps in it. The key of C has no sharps and no flats.

There’s a hidden effect in here, and it’s this: the first and next to last steps, which are II and VIII on the scale, don’t matter that much (until we get to insanely advanced jazz theory) but the next four steps are all important in harmonizing on the dominant note for various reasons.

They are III, IV, V, and VI. Two of them (IV and V) create the Circle of Fifths, three of them (I, III, and V) create all Major chords, and one of them (VI) is the most important sibling of the main key, because it creates the relative minor.

I’ll plop in the C Major scale again for reference:

Here are the beginnings of the arrangement of the Circle of Fifths. Start with any arbitrary note, in this case, C, and stick it on a circle divided into twelve sections of 30 degrees. Next, clockwise from C, put the V tone, which is G. Counterclockwise to C, put the VI tone, or F.

Fun fact: If we start our scale on F, C will be V. Here we go, using flats instead of sharps:

If we extend the Circle of Fifths clockwise from C and G, then the next steps go D, A, E, B, F#… and this is where it takes an interesting turn.

Normally, the next note up from F# would be C#. However, that’s an icky key signature in which every note is sharp, so it was decided long ago that this was where things would swap out to Db, which is the same thing.

And the best part is that once you hit Db, you get to go backwards up the scale — Db, Ab, Eb, Bb, F… and F brings us right back to C.

As for the importance of I, III, V, that’s simple. Put those three notes together, you get a Major chord.

Then there’s the VII, which is the III to the V of the chord based on the tonic I that will wrap up in the aforementioned II in order to create the perfect chord to transition back to the original key.

Now here’s the final mind bender. Add the IV of C onto that, which is F, and you get what is called a G7 chord, since F is VIIb in the key of G. And what does this chord do? Like I said, it leads your ear right back to the C Major chord.

A quick recap on the notes in that G7 chord relative to the key of C Major: V, VII, II (actually IX) IVb (technically XIb). In the key of G, those notes are I, III, V, VIIb. You’ll notice that the difference in every case is four.

By the way, the F7 chord in the key of C consists of the IV, VI, VIII, and IIIb (technically Xb) in C, the notes being F, A, C, Eb. In the key of F, they are I, III, V, VIIb. In this case, the difference in position is three in the opposite direction, although if I raise each note in the F chord an octave (i.e. add 7 to the number) then they all happen to be… four above the corresponding note in the key of C.

So, like I said, music theory is nothing but math, and I haven’t even gotten into notation and time signatures and all that good stuff. But, to me the most amazing part of all of this is that we somehow took the only natural language — math — and teased out of it one of our greatest and most enduring art forms.

Somewhere along the way, someone noticed that if you had, oh let’s say the thigh bone of an animal left over from dinner, and you hollowed it out and blew through it, it made a note.

And if you randomly punched a whole somewhere along its length, it would make a different note. So, you could now play two notes by covering and uncovering the hole. Let’s make more holes!

But the willy-nilly approach probably led to some god-awful sounding bone flutes and it didn’t change until some genius came along and said, “Hey… let’s make one hole right in the middle.”

So they did, and that worked because the two notes it could play were just the same note an octave apart. Hooray, primitive man discovers the bassline to My Sharona! But they clearly progressed from there, probably starting by drilling the next holes midway between the first and either end, and so on, adding holes and notes.

Eventually, after humans had discovered they could do similar things with vibrating membranes (drum solo!) and strings (cue violins) scientists studied the relationships, discovered that sound came in waves and frequencies, and the length of a wave determined the frequency, or note.

Cover all the holes and you get I in whatever key the flute was cut in. Uncover them, and you get VIII. Seven holes give you each note in the Major scale if the physical intervals are right.

Which brings me to things like modern flutes, piccolos, and saxophones, which are still just basically tubes with holes in them, right? So why are they so damn complicated, with all the extra holes and pushy bits and valves?

Simple. They don’t just play 8 notes, and a lot of them don’t just cover one octave. All those extra fiddly bits are there to create those other notes in the whole 12 tone scale.

Funniest conversation I ever had with a fellow musician as he watched me improvise on the piano. Keep in mind that he played clarinet and saxophone.

Musician friend: “My god. How the hell do you know where to put all your fingers to play that?”

Me: (Blank stare, blink) Dude… I’m looking at a map. How the hell do you know where to put your fingers?”

I think that gave him a huge “A-ha” moment.