Since a lot of us around the world are still stuck inside for the most part, I thought I’d invite you to go on a little virtual journey with me, courtesy of YouTube creator morn1415, whom I’ve followed for a long time. He creates amazing videos on scientific subjects — generally dealing with astrophysics and cosmology.

He shot to internet fame almost immediately for his first video post over a decade ago, called Star Size Comparison, and it’s worth a watch. But this is nothing compared to his work on display in the two videos below, because the scale from top to bottom is so much more enormous.

It’s an amazing work, and best to keep in mind that each new cube showing scale has sides ten times longer than the previous, faces a hundred times bigger, and one thousand times the volume.

In the original, we take a leisurely trip to the top and then come flying back down. Put it in the highest res you can, and buckle in for an amazing journey.

No matter how you take the trip, it’s a great visualization of the scale of things and our place among them. If you like these, you won’t be disappointed if you subscribe to his channel.

Note: I am not affiliated with the morn1415 website in any way, other than being a long-time fan and subscriber. 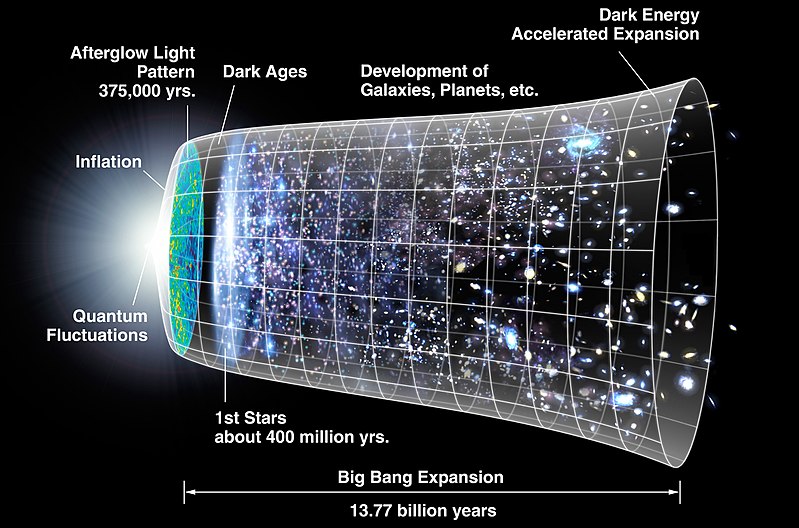 If you want to truly be amazed by the wonders of the universe, the quickest way to do so is to learn about the science behind it.

And pardon the split infinitive in that paragraph, but it’s really not wrong in English, since it became a “rule” only after a very pedantic 19th century grammarian, John Comly, declared that it was wrong to do so — although neither he nor his contemporaries ever called it that. Unfortunately, he based this on the grammar and structure of Latin, to which that of English bears little resemblance.

That may seem like a digression, but it brings us back to one of the most famous modern split infinitives that still resonates throughout pop culture today: “To boldly go where no one has gone before,” and this brings us gracefully back to science and space.

That’s where we find the answer to the question “Where did we come from?” But what would you say exactly is the ultimate force that wound up directly creating each one of us?

One quick and easy answer is the Big Bang. This is the idea, derived from the observation that everything in the universe seems to be moving away from everything else, so that at one time everything must have been in the same place. That is, what became the entire universe was concentrated into a single point that then somehow exploded outward into, well, everything.

But the Big Bang itself did not instantly create stars and planets and galaxies. It was way too energetic for that. So energetic, in fact, that matter couldn’t even form in the immediate aftermath. Instead, everything that existed was an incredibly hot quantum foam of unbound quarks. Don’t let the words daunt you. The simple version is that elements are made up of atoms, and an atom is the smallest unit of any particular element — an atom of hydrogen, helium, carbon, iron, etc. Once you move to the subatomic particles that make up the atom, you lose any of the properties that make the element unique, most of which have to do with its atomic weight and the number of free electrons wrapped around it.

Those atoms in turn are made up of electrons that are sort of smeared out in a statistical cloud around a nucleus made up of at least one proton (hydrogen), and then working their way up through larger collections of protons (positively charged), an often but not always equal number of neutrons (no charge), and a number of electrons (negatively charged) that may or may not equal the number of protons.

Note that despite what you might have learned in school, an atom does not resemble a mini solar system in any particular way at all, with the electron “planets” neatly orbiting the “star” that is the nucleus. Instead, the electrons live in what are called orbitals and shells, but they have a lot more to do with energy levels and probable locations than they do with literal placement of discrete dots of energy.

Things get weird on this level, but they get weirder if you go one step down and look inside of the protons and neutrons. These particles themselves are made up of smaller particles that were named quarks by Nobel Prize winner Murray Gell-Man as a direct homage to James Joyce. The word comes from a line from Joyce’s book Finnegans Wake, which itself is about as weird and wonderful as the world of subatomic science. “Three quarks for muster mark…”

The only difference between a proton and a neutron is the configuration of quarks inside. I won’t get into it here except to say that if we call the quarks arbitrarily U and D, a proton has two U’s and one D, while a neutron has two D’s and one U.

And for the first few milliseconds after the Big Bang, the universe was an incredibly hot soup of all these U’s and D’s flying around, unable to connect to each other because the other theoretical particles that could have tied them together, gluons, couldn’t get a grip. The universe was also incredibly dark because photons couldn’t move through it.

Eventually, as things started to cool down, the quarks and gluons started to come together, creating protons and neutrons. The protons, in turn, started to hook up with free electrons to create hydrogen. (The neutrons, not so much at first, since when unbound they tend to not last a long time.) Eventually, the protons and neutrons did start to hook up and lure in electrons, creating helium. This is also when the universe became transparent, because now the photons could move through it freely.

But we still haven’t quite gotten to the force that created all of us just yet. It’s not the attractive force that pulled quarks and gluons together, nor is it the forces that bound electrons and protons. That’s because, given just those forces, the subatomic particles and atoms really wouldn’t have done much else. But once they reached the stage of matter — once there were elements with some appreciable (though tiny) mass to toss around, things changed.

Vast clouds of gas slowly started to fall into an inexorable dance as atoms of hydrogen found themselves pulled together, closer and closer, and tighter and tighter. The bigger the cloud became, the stronger the attraction until, eventually, a big enough cloud of hydrogen would suddenly collapse into itself so rapidly that the hydrogen atoms in the middle would slam together with such force that it would overcome the natural repulsion of the like-charged electron shells and push hard enough to force the nuclei together. And then you’d get… more helium, along with a gigantic release of energy.

And so, a star is born. A bunch of stars. A ton of stars, everywhere, and in great abundance, and with great energy. This is the first generation of stars in the universe and, to quote Bladerunner, “The light that burns twice as bright burns half as long.” These early stars were so energetic that they didn’t make it long, anf they managed to really squish things together. You see, after you turn hydrogen into helium, the same process turns helium into heavier elements, like lithium, carbon, neon, oxygen, and silicon. And then, once it starts to fuse atoms into iron, a funny thing happens. Suddenly, the process stops producing energy, the star collapses into itself, and then it goes boom, scattering those elements aback out into the universe.

This process will happen to stars that don’t burn as brightly, either. It will just take longer. The first stars lasted a few hundred million years. A star like our sun is probably good for about ten billion, and we’re only half way along.

But… have you figured out yet which force made these stars create elements and then explode and then create us, because that was the question: “What would you say exactly is the ultimate force that wound up directly creating each one of us?”

It’s called gravity. Once the universe cooled down enough for matter to form — and hence mass — this most basic of laws took over, and anything that did have mass started to attract everything else with mass. That’s just how it works. And once enough mass got pulled together, it came together tightly enough to overcome any other forces in the universe.  Remember: atoms fused because the repulsive force of the negative charge of electrons was nowhere near strong enough to resist gravity, and neither was the nuclear force between protons and neutrons.

Let gravity grow strong enough, in fact, and it can mash matter so hard that it turns every proton in a star into a neutron which is surrounded by a surface cloud of every electron sort of in the same place, and this is called a neutron star. Squash it even harder, and you get a black hole, a very misunderstood (by lay people) object that nonetheless seems to actually be the anchor (or one of many) that holds most galaxies together.

Fun fact, though. If our sun suddenly turned into a black hole (unlikely because it’s not massive enough) the only effect on the Earth would be… nothing for about eight minutes, and then it would get very dark and cold, although we might also be fried to death by a burst of gamma radiation. But the one thing that would not happen is any of the planets suddenly getting sucked into it.

Funny thing about black holes. When they collapse like that and become one, their radius may change drastically, like from sun-sized to New York-sized, but their gravity doesn’t change at all.

But I do digress. Or maybe not. Circle back to the point of this story: The universal force that we still understand the least also happens to be the same damn force that created every single atom in every one of our bodies. Whether it has its own particle or vector, or whether it’s just an emergent property of space and time, is still anybody’s guess. But whichever turns out to be true, if you know some science, then the power of gravity is actually quite impressive.